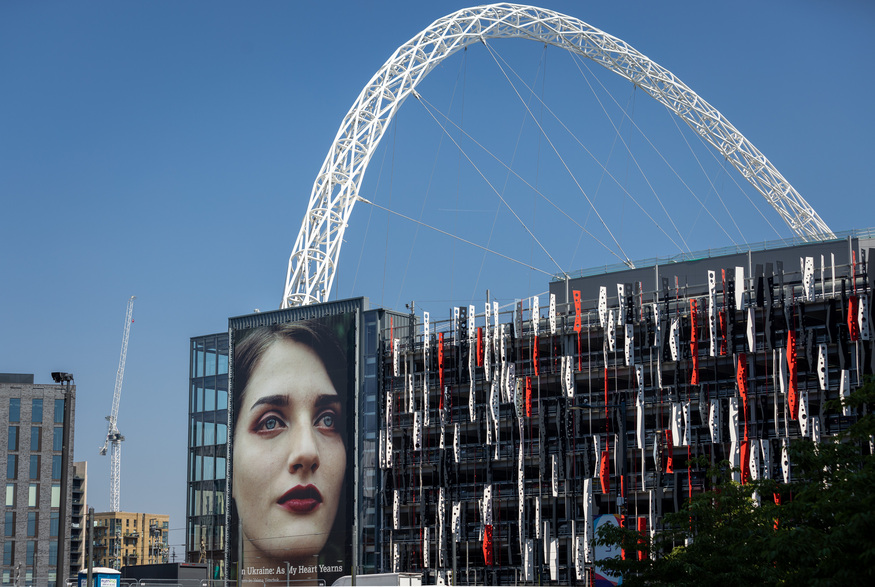 Ukrainian-born artist Ira Lupu curated Visions of Home, an outdoor exhibition at Wembley Park. Here, she writes about her upbringing, her need to return to Ukraine in troubling times, and what the most beautiful thing is about her home country.

I was born and raised in Odesa, Ukraine, a lazy yet somewhat legendary port city and vacation centre at the shore of the Black Sea.

I never intended to move to the US and stay there but that’s how the events of my life unfolded. It’s been always crucial for me to maintain a connection to my home country as I felt that there was much that wasn’t said and done about it. I’ve developed On Dreams and Screens, my biggest art project so far, while already living in the US yet it was almost exclusively shot in Ukraine and dedicated to Ukrainian women.

I’m still trying to spend two-three months year in my home country as it is my greatest source of creative energy and inspiration.

Despite the obvious risks, it was particularly important for me to come here this summer as I wanted to share this moment in history and live through it with my country and my people. I just got back from Bucha, where Russians have brutally executed nearly 500 innocent civilians, and waking up to air raid alert or air defence explosions is now a new normalcy. But along with all the ongoing atrocities, trauma and destruction, there is also a lot of beauty, hope, and strength in the air.

For me, curating Visions of Home (with a loving help from Josh McNorton and Wembley Park) was a great opportunity to cover a few goals at a time. I’m visiting Ukraine now myself and seeing your homeland and your people in this new mode of physical and psychological existence is quite surreal. I wanted to “dissect” this surreality and see what it actually consists of, and where we are heading.

It’s a chance to raise the issue of this ongoing existential war amidst democratic Europe in a moment when it is in its decisive moment but the crucial global attention is slowly fading away. I believe that in order to care for something, you need to maintain an emotional connection to it — not just a mental and intellectual one. With this exhibition, I’ve been trying to wear my own Ukrainian heart on a sleeve and expose it.

Yelena Yemchuk had to leave Ukraine when she was 15 but she maintained the most loving connection to her homeland and people (when many long-term immigrants simply choose to withdraw). Hers is the six-storey-high portrait of Anna Domashyna, a regular but not-so-regular Ukrainian girl. There’s an almost mystical story behind the encounter of Yelena, Anja and myself; I met Anna in a Ukrainian bar at a random stoner rock concert. Totally amazed by her energy, I asked for her phone number, which I never do. When I already forgot how she looks, I called her and invited to a photo shoot with Yelena once she was in Ukraine. All of a sudden, she became Yelena’s (and everyone else’s) muse. Coming from the Mykola Gogol-praised town of Myrhorod, Anna carries this kind yet mystical, fragile and at the same time very strong energy that is inherent to Ukraine.

In Ukraine: As My Heart Yearns is an outdoor photo exhibition of 12 two-sided panels. The trick is that if you walk in one direction, you see black and white section with older or nostalgic looking imagery. The other side is in colour and more contemporary. Image: Chris Winter

I’m very proud to have rare Paraska Plytka-Horytsvit photographs in the show. She is one of the thousands of Ukrainian voices that the Soviet regime was trying to erase, and the dusty and rusty negatives we show at the exhibition were discovered just about seven years ago by a total coincidence in a hidden spot of her house in the Carpathian Mountains. After a decade of labour camp work for her support of the Ukrainian national liberation movement, she got back to her village of Krivorivnya and she’s been painting, writing, and photographing there until the end of her days. Her depictions of everyday Ukrainian village life have an elusive feel once you know that this simplicity and beauty was under a constant existential threat.

Visions of Home also features  a diptych of Yana Kononova’s visual studies of the destruction in de-occupied areas of Kyiv region. To me, her photographs are very different, way more charged, sensitive and nearly philosophical than any Western photojournalistic imagery made in the area; and Elena Subach and Helen Zhgir’s outstanding photographs and interviews (tied through a QR code) with the internally displaced refugees in Ukraine — I know that this highly empathic and ethical work was bathed in tears of both the authors and protagonists.

It’s been sweet from Wembley Park’s side to insist on including my project focusing on female online sex workers of Ukraine through a humanising, “de-othering” lens. This all-women exhibition, by the way, is titled by the line from Taras Shevchenko who was a poet, painter, and the only national hero the Soviets allowed the Ukrainians to have.

The Facade work on the Spanish Steps, produced by the underground art group of professional Odesa-based architects MNPL (Monopoly) is a robust visual celebration of Ukrainian vernacular architecture styles. However, things are never simply “fun” with this group as their work always carries a smart social commentary, if not criticism. Ukrainian self-reflection and self-irony is a very important feature of national identity.

“Ukrainian self-reflection and self-irony is a very important feature of national identity and I’m happy to feature a work with this undertone.” Image: Chris Winter

One of the bright highlights of Visions of Home is Kateryna Gaidamaka’s layered digital “Remember Ukraine” piece. We worked together with Katya to develop a bold and bright message to the 90,000 crossing the Bobby Moore Bridge and seeing the digital totems installed by the Wembley stadium entrance. We developed a motion design piece mentioning all the many villages, towns, and cities heavily affected by the Russian war. This approach helps to widen, contextualise, and humanise the word Ukraine, and I hope that it allows the viewer to acknowledge the reality of the millions of fates behind it that were affected.

My whole family are refugees now so I’m here alone moving around Ukraine, doing photography and visiting my friends in different cities who decided to stay.

A couple of my refugee friends came to London since war broke out. One is a top tech specialist and another is a top media producer. London is lucky to have them, while I’m a little sad that so many talented people had to flee the country. Most of the Ukrainians are filled with gratitude for the strong and continuous support of us by the British people.

This chance to highlight Ukrainian artists is key. You’ll be surprised to learn for how many centuries we’ve been devoid of this opportunity to speak for ourselves, and this is still an ongoing issue with “know your place” aggression reaching its peak in recent months.

The most beautiful thing about my country is the Ukrainian spirit. Easy, fun, freedom-loving yet fierce, hardworking, invincible — and somewhat paradoxical.

Visions of Home is at Wembley Park until October 2022. It’s free to view the artworks.